Scroll Down
Table of Contents

Market study on the renewable energy trends in France. It includes the topics of:

This report has been prepared in Mai and June 2017 by Eléonore Bouchet and updated in June 2018. 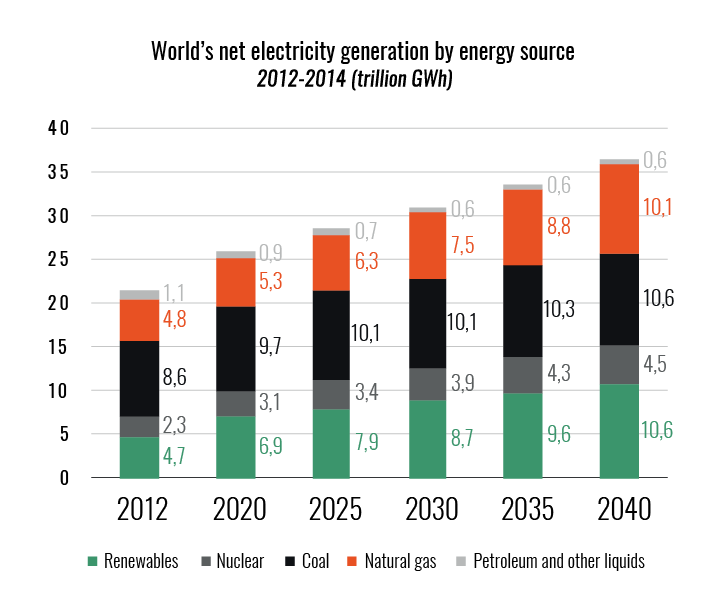 Petroleum and other liquid fuels

The use of petroleum and other liquid fuels falls from 5% in 2012 to 2% in 2040, with an average annual decline of 2,2%. Despite their recent decline, oil prices are expected to be higher on the long-term. As a result liquids remain a more expensive option compared to other fuels used for electricity generation.

Nuclear electricity generation increases from 2,3 trillion kWh in 2012 to 4,5 trillion kWh in 2040. The growing limits on gas emissions encourages the development of nuclear capacity. Underlying the nuclear projections: 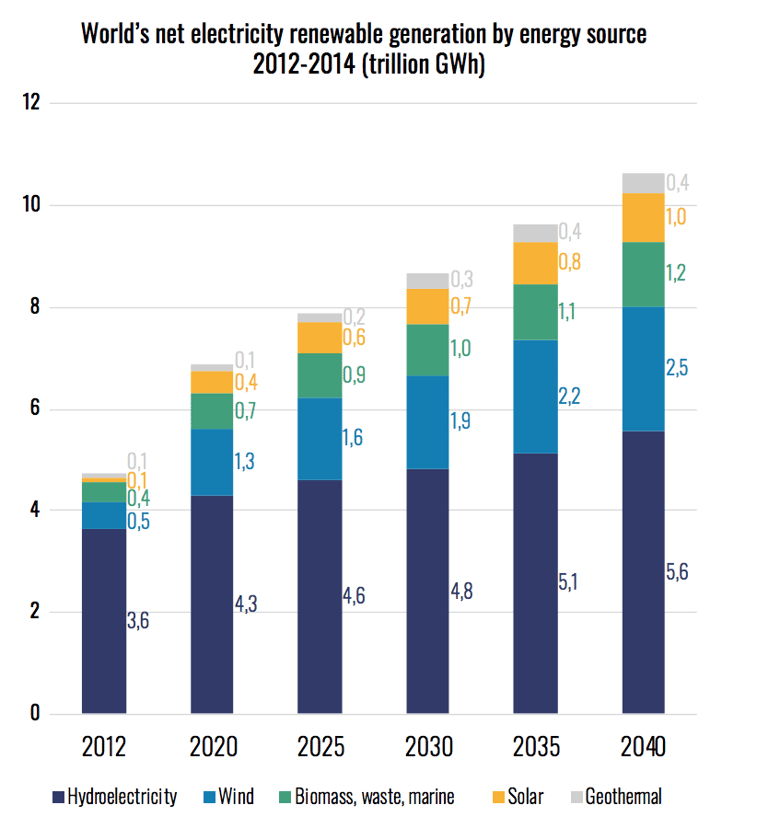 Generation from non hydropower renewables is the predominant source of the increase of renewables share of the world’s total supply (5,7%/year). It outpaces the increases in natural gas (2,7%/ year), nuclear (2,4%/year) and coal (0,7%/year). 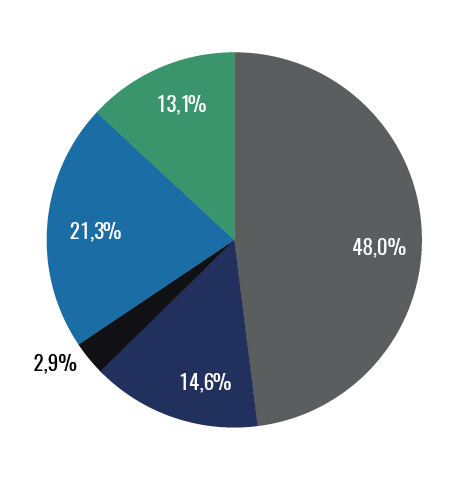 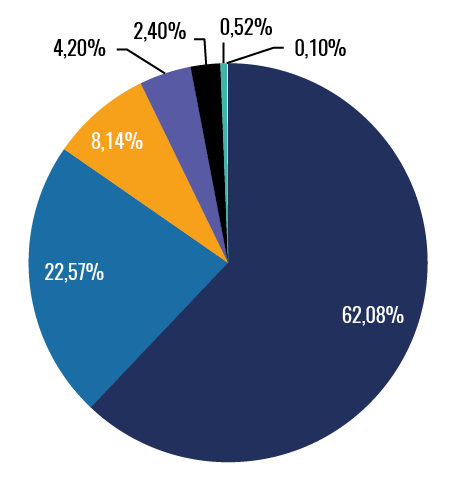 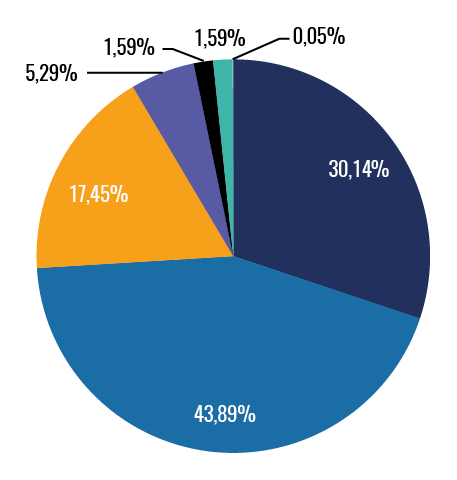 The president Emmanuel Macron plans to take action and invest in alternative renewable energy sources. With the environmental activist, Nicolas Hulot as Minister of Ecological and Solidarity Transition, the government will follow the previous commitments in favour of the energy transition.

The French president Emmanuel Macron program is in line with the Paris agreements at international level and with the law “Energy Transition for Green Growth“ and the biodiversity law.

On 50 billion public investments planned by the government, 15 billions will be dedicated to the energy and ecological transition.

The Energy Transition law sets the main objectives of a new French energy model. It aims to encourage green growth by reducing the French energy invoice and by favouring renewable energy.

Increase the use of Renewable Energy

Planned by the energy transition law, the MEP sets the general orientations of the energy policy in France (oct. 2016). 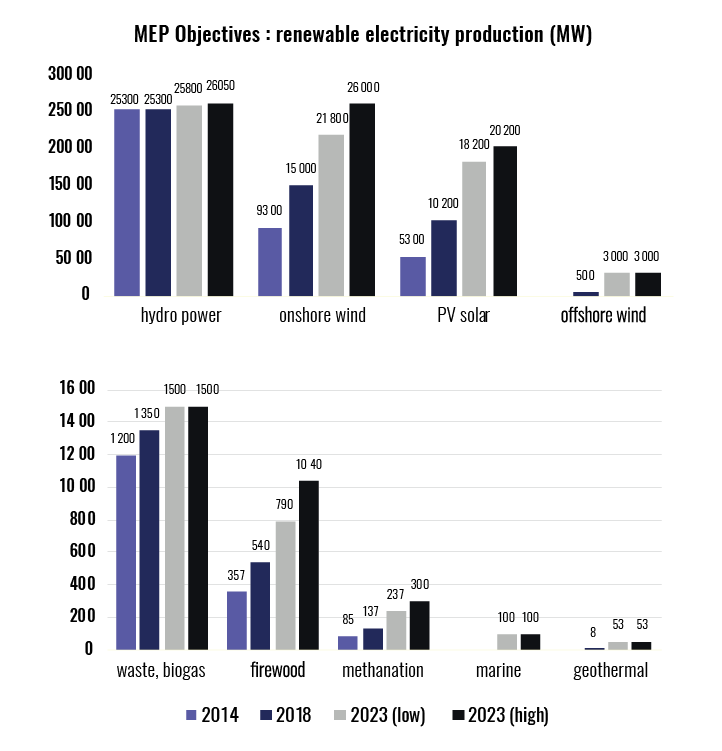 The total of quantitative objectives of development in renewable electricity enables to reach a renewable energy production between 150 and 167 TWh a year in 2023.

The MEP expects no development, except the replacement of former hydraulic utilities.

The objectives are coherent with the French potential. To reach these objectives, the growth has to be 1,5-2,2GW a year.

Between 500 and 6000 MW more of started projects, according to the concentrations of the convenient zones, the feedback of the launched of the firsts projects and prices. However, delays already were announced for the firsts offshore wind plants.

The objectives are ambitious and the legal framework evolved in the right direction.

The objective is not really ambitious and should be reach.

The objective is very uncertain. It will depend on the success of calls for tender (CRE) and on the improvement of the current incineration utilities.

Between 200 and 2000 MW more of started projects, according to the feedback of the pilot farms and the prices conditions.

No objectives are planned in the MEP.

PV manufacturing companies have been downsizing and consolidating as a result of a slow down of module production and the excess capacity of PV manufacturing. It is a sign that the PV market becomes more mature worldwide.

China continues to be the largest producer of PV modules, accounting for more than 60% of annual global production. However China is the sixth-largest market for PV behind Germany, Italy, Japan, Spain and France.

The UK is the most active country (additional 3.5GW). Germany remains the first country when considering the total power (40GW). France hold the 3rd rank in term of connected power in 2015 and is 4th in term of total PV accumulated capacity. 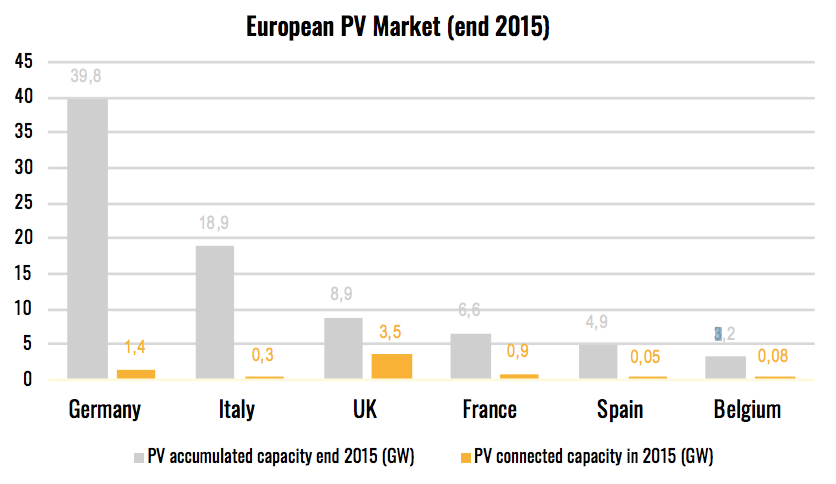 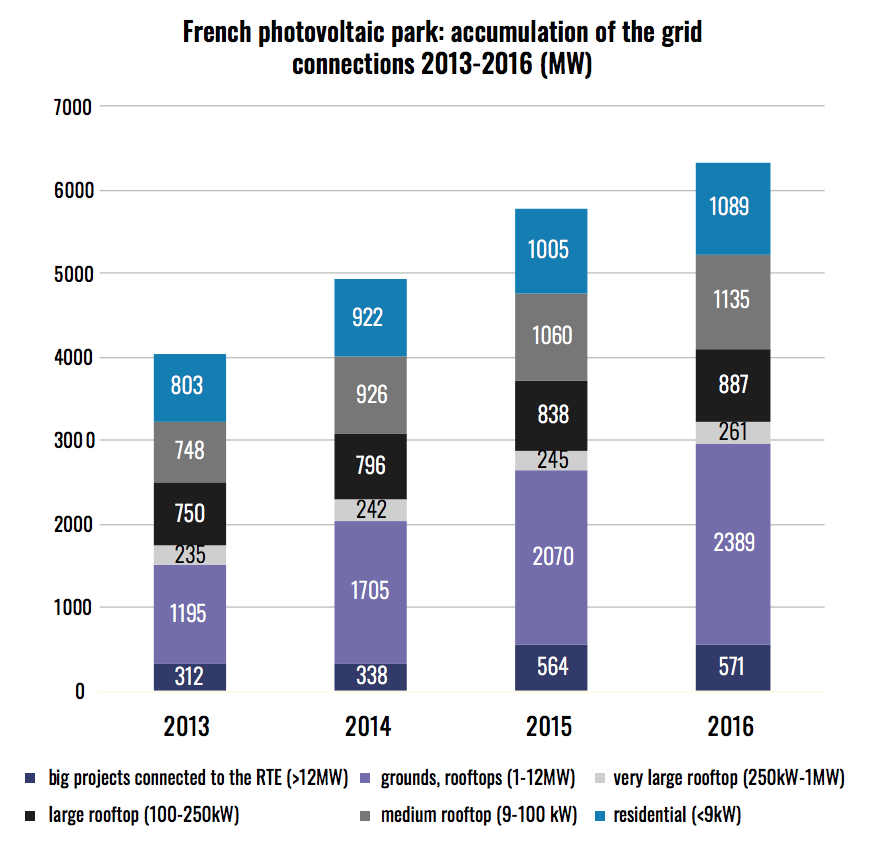 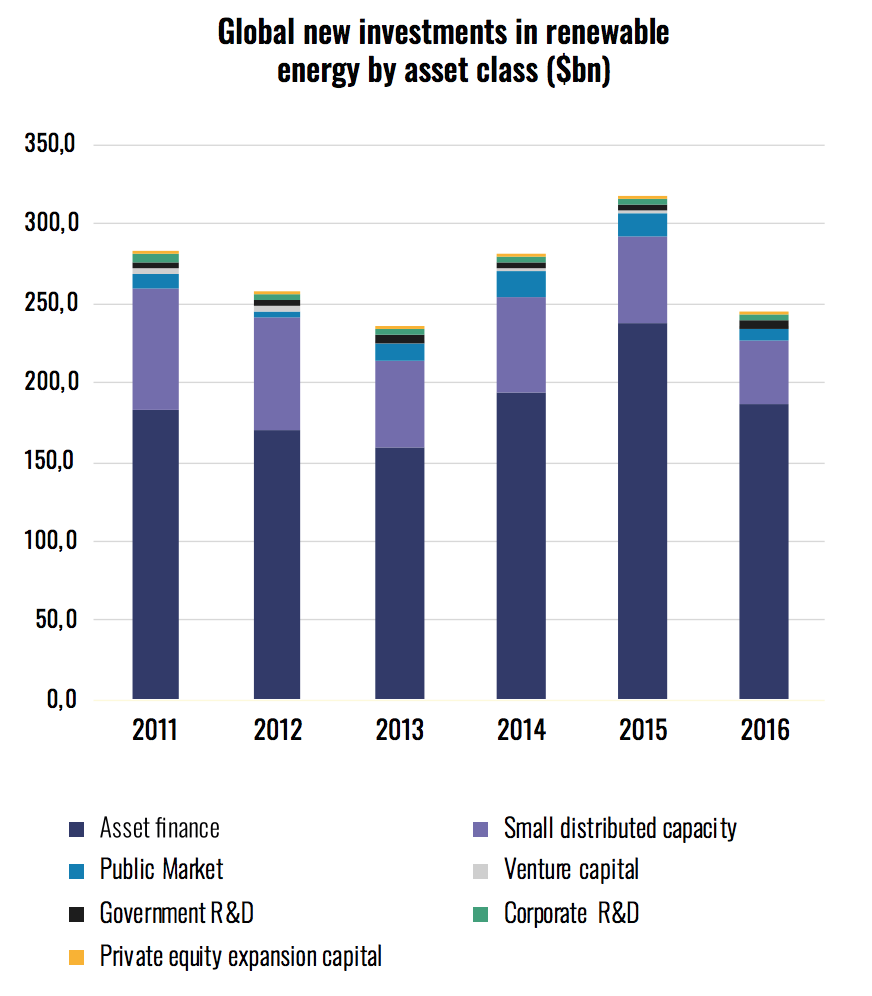 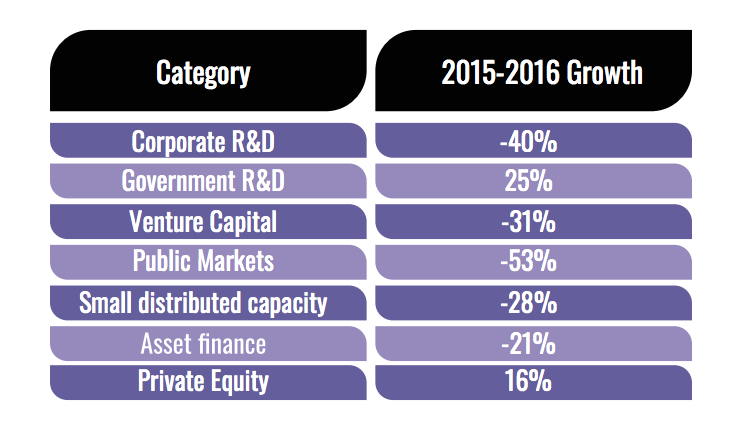 Reasons for the fall in investment in renewables in 2016

Hybrid projects: two different technologies in the same location, to make use of shared land, grid connections and maintenance and to reduce intermittency. Some 5.6GW of these projects have been built or are under development worldwide, including hydro-solar, wind-solar, PV-solar thermal, solar thermal-geothermal and biomass-geothermal.

Global Investment Trends in RE by Sectors (exclude large hydro) 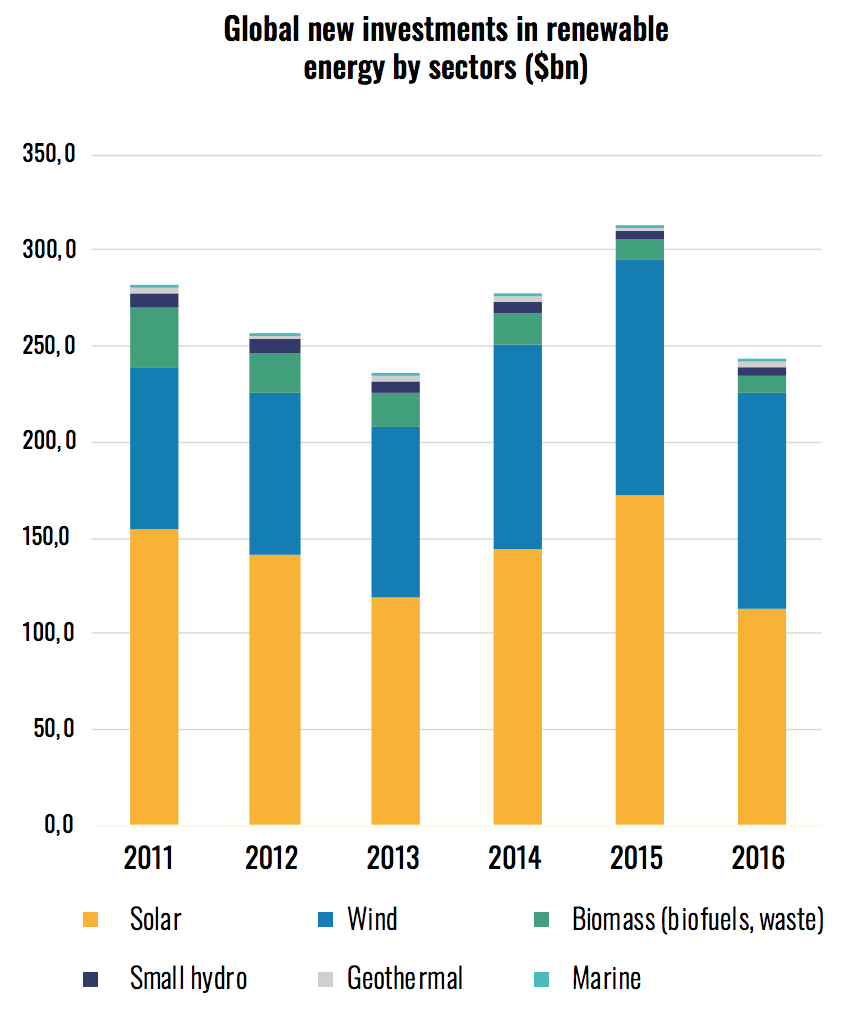 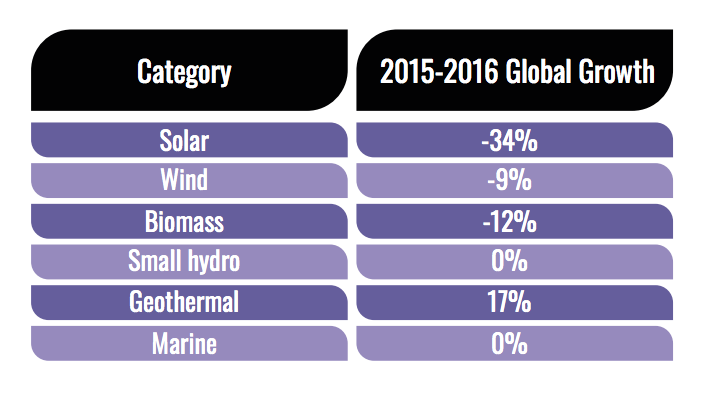 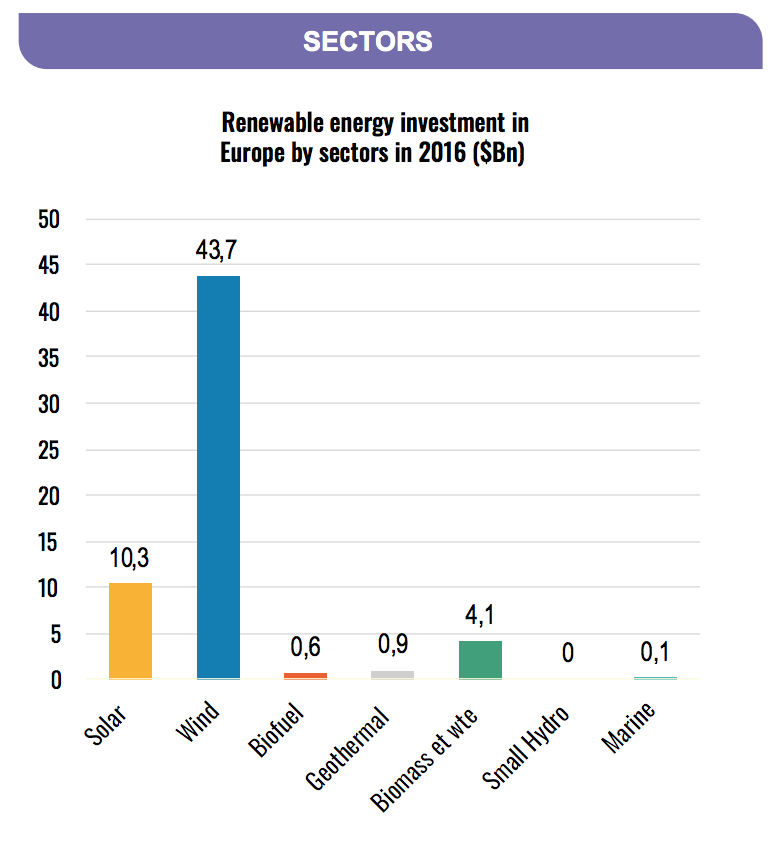 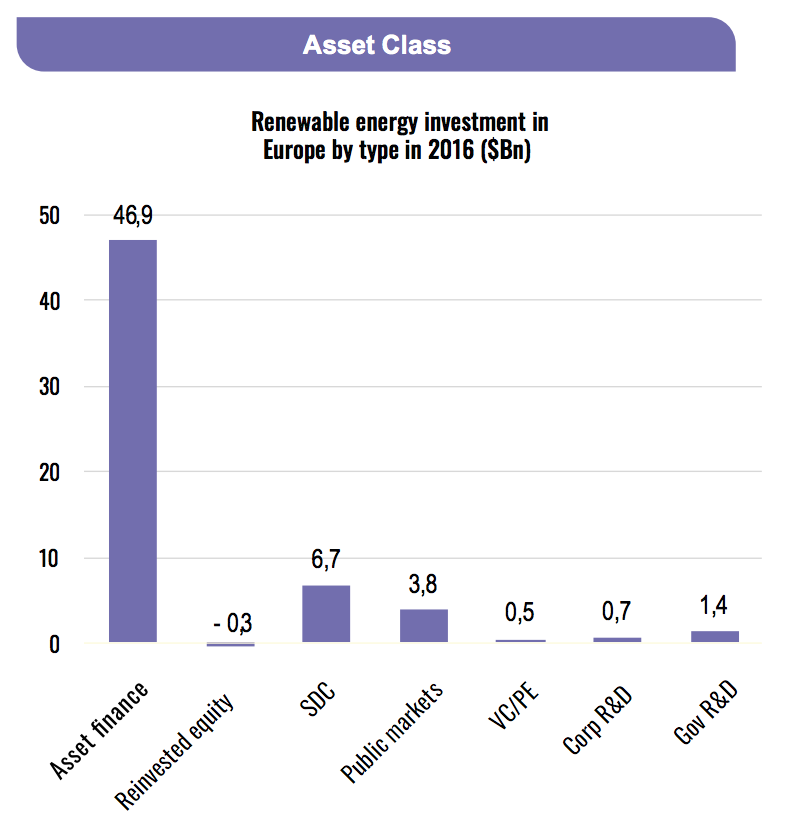 New investments in RE by region 2016 (World, Europe and France) 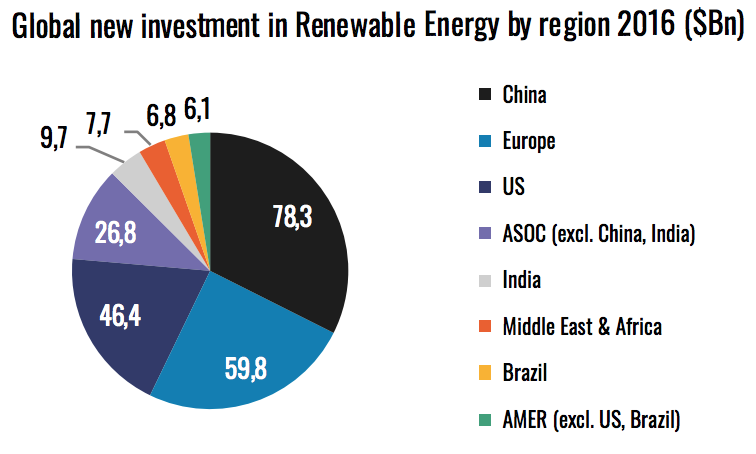 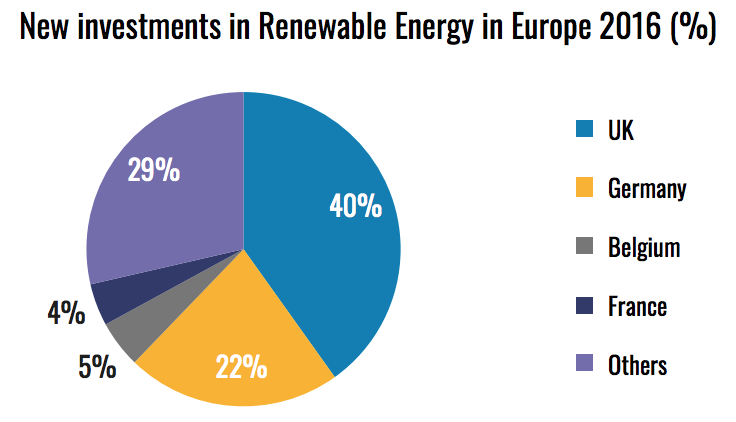 However we can hypothesize that 70% of the total amount of investments in RE comes from the banks. By this hypothesis, it occurs that 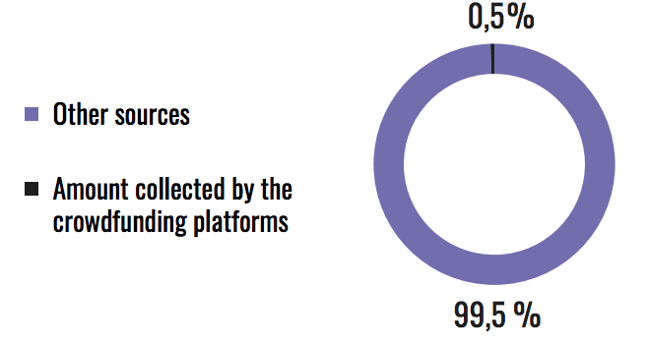 Crowdfunding in renewable energy in France in 2016

Out of a total of €233,8 millions collected by crowdfunding in France in 2016, €11,5 millions financed 66 renewable energy projects, exclusively in debt. 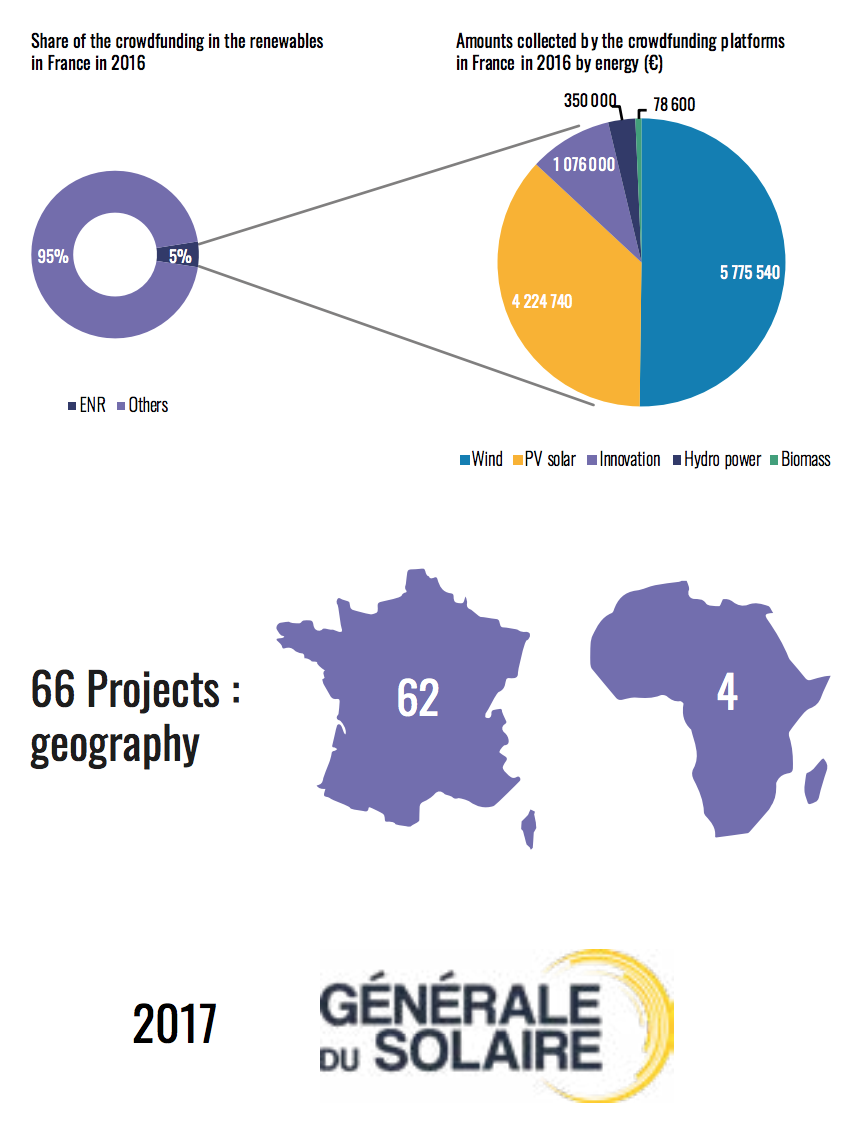 In 2017, Générale du solaire, a group specialized in developing, engineering-procurement-construction (EPC), financing and operating solar power plants raised €2,5 millions by crowdfunding on the platform Lendosphere to finance its development.

Through this crowdfunding operation, the company wanted to associate the private individuals. 683 lenders mobilized with loans between €50 and €70,000 in addition of two institutional investors (Allianz Crowdlending, Prêtons ensemble).

Professional intermediary which federates a group of stakeholders looking for buying or selling energy jointly to benefit of a better price.

All money invested in renewable energy generation projects, whether from internal company balance sheets, from loans, or from equity capital.

= Commission de régulation de l’énergie The CRE is a French independent legal authority, created on March 24th, 2000. It monitors the smooth functioning of the energy market and arbitrate the differences between the users and the developers.

All money invested by venture capital and private equity funds in the equity of specialist companies developing renewable energy technology. Investment in companies setting up generating capacity through special purpose vehicles is counted in the asset finance figure.

Linky is the name of the smart meter developed by Enedis (formerly ERDF), main administrator of the electricity network of distribution in France, in application of the European directives recommending the generalisation of this type of meters.

= Réseau de Transport d’Électricité It is the electricity transmission system operator of France.

Fonds Professionnel de Capital Investissement FCPI is a French type of funds dedicated to investments in innovation. To qualify for favourable treatment, at least 60% of the assets of the FCPI must be invested in innovative companies established in the EU and subject to local corporate income tax.